Chests are the most efficient way of obtaining Coins in Pet Simulator. They are reskins of the Rubyhorde the Rapacious' Treasure gear on the Roblox catalog. There are currently 4 known types of Chests: Mini Chests, Regular Chests, Mega Chests, and Omega Chests. Chests come in different colors depending on the biome. The amount of coins you earn from a chest varies depending on your pet level. A higher pet level allows you to obtain more coins from a chest. 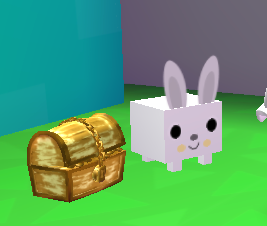 Mini Chests give the least amount of money out of all the chests of that biome, but they give more than a stack of coins in the same biome. They take a bit longer to collect than it does to collect a stack of coins. Farming a lot of these is usually the most efficient way to earn quick money.

Regular Chests give more money than Mini Chests and far less than a Mega Chest. This is the most common chest size. Farming these chests is a very efficient way to gain money. They are about as tall as the player.

Pink Chests are slightly bigger than the normal ones on Pink Planet and have 42,000,000 HP, but they give more coins and it gives Moon Coins only. (No Image)

Omega Chests (or Phantom Chests) are significantly rarer than any other chest in the game. Omega Chests have 9,000,000 HP on Earth and 60,000,000 HP on the moon. The ones on the Earth are purple and translucent while the ones on the moon are green. No matter where the Phantom Chest is, if destroyed, it will result in an explosion sound and a flash on every screen in the server.

Mega Chests can be smaller or the same size as Omega Chests, but they're usually always the same color as a regular chest in the Grass Biome and have a range of 40,000 HP to 400,000 HP. The mega Chest on earth in Aurora Mushrooms, the previous biggest chest in the game has 7,500,000 HP with a dark bluish color.

After the release of Update 9 (see Changelog), a new mega chest on the moon in the Dominus Shrine that has 55,555,555,555 HP and is the new biggest chest and the chest with the most HP in the game.

All chests have colors, indicative of their biome (except for Omega Chests), and the time it takes to open and the profit earned from all chests go upwards exponentially the farther away the chest is from spawn.

There are a total of 26 different types of chests in the game. The value increases the further the biome you are in and the health too. 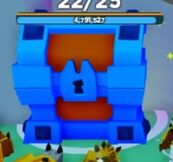 The Titanic Chest appears on the spawn and has 40 million HP. A maximum of 50 pets can collect it. The respawn time after it gets collected is 22:10 minutes

The Giant Chest appears in any place and has 5 million HP. A maximum of 25 pets can collect it.

Retrieved from "https://pet-simulator.fandom.com/wiki/List_of_Chests?oldid=52790"
Community content is available under CC-BY-SA unless otherwise noted.